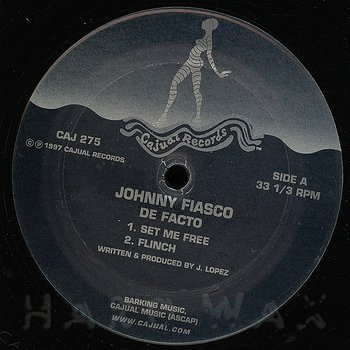 ‘I know a track is done when it draws out some emotion’ Johnny Fiasco told 5mag. The Chicago producer’s tracks tend to evoke emotion within the first few minutes. Releases such as ‘Kalimba‘, ‘In The Best Mood‘, ‘Last Word‘ and his remix of Slammer, Ivaylo & Renate’s ‘Invisible Solution‘ are tracks you can play for half an hour straight without clearing the dancefloor. Drenched in jazziness, his production always is a groove-filled affair, owing to his musical background. In operation since ’93, the Chicagoan producer found his releases picked up by the trend-setting Green Velvet, who offered the outlet of his Cajual Records label. Fiasco’s debut album Moody Grooves Vol. II came out in 1997, and with it a barnstorming, monster House opener ‘Set Me Free’.

Similarly to another Cajual track we’ve reviewed ‘Percolator‘, the influence of ‘Set Me Free’ on today’s Tech-House scene is quite uncanny. Starting with broken-beat drum, a hat is energetically played in tandem. ‘Take 5‘, Johnny’s release on prolific soulful house label of the early 2000s Om Records. showcased some unparalleled vocal sample work. It’s no different here, with the regurgitating staccato’d ‘Oh Oh Oh’s expertly chopped. Mutated stringed synths pour all over the top. Fiasco cites Michael Jackson’s ‘Rock With You’ as being one of his major influences, and you can certainly hear it here. The Unique Selling Point of the track, however, is its sonorant bass. Dirty yet funky, it wouldn’t fall out of place in a Hot Creations‘ Hot Waves compilation. An electronic piano loop mixes things up to keep a flavourful and colourful vibe to the track. END_OF_DOCUMENT_TOKEN_TO_BE_REPLACED